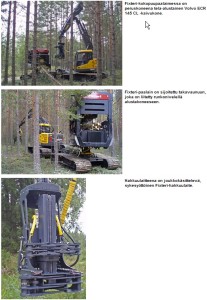 END_OF_DOCUMENT_TOKEN_TO_BE_REPLACED

StanForD has been coordinated by Skogforsk since the first initiative to establish a standard was taken in 1986/87. The first standard was decided in 1988. Finnish users have been involved since the early 90’s through Metsäteho. The organisation of the standard was set in its present form in the late 90’s when the large manufacturers agreed to finance the administrative work together with the Swedish forest companies through Skogforsk.

The present standard has had the same format since the beginning and one of the fundamental principles has been to have full backwards compatibility through never allowing any variables to be excluded. The format was established with the goal of being flexible as well as small in size. These facts mean that it has been possible to adapt the standard to changing conditions but also that quite a bit of historical garbage (variables presently of no use) has accumulated over the years. The format is still working well but it is unique. This means that for a beginner a quite a lot of work has to be put into understanding (reading and writing) the technical format.

StanForD 2010 Benefits, needs and requirements for users and manufacturers